Whispering Bones is the third faction quest for The Blue Chamber Collective in Outward, and sixth in the series of main quests.

This quest has a timer of 40 days, which begins when you start the quest. If the quest is not completed in this time, there will be extra Ghosts in the Necropolis at the end of the quest, and it may negatively impact your rewards.

After completing Ash Giants, Rissa Aberdeen asks you to join The Krypteia. Krypteia governs Blue Chamber using Ancestral Memories, memories that are enshrined by several founding members of Blue Chamber. One member of Krypteia, a follower of the Scarlet Lady, has been leeching power from Ancestral Memories. The player and Roland Argenson, Yzan's younger brother, will be tasked with safeguarding Ancestral Memories from the Lich and her descendants.

At several points throughout the quest, there are key dialogue moments with Roland which greatly impact the outcome of the quest. If you wish to obtain the Lantern of Souls or Ancestor's Memories skill then you should take note of these moments, and complete all optional objectives to assist Roland.

The pre-quest moments to boost Roland's confidence include:

To receive the "perfect" success, you must have spoken to Roland and encouraged him at least twice before the quest begins, and then help him with each optional task during the quest. 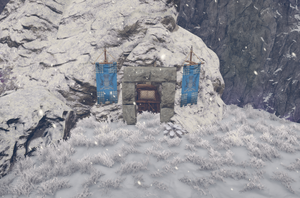 After speaking with Rissa, we learn that she is the leader of The Krypteia, a secret organization who harness Ancestral Memories to protect and govern the Blue Chamber. Rissa will task you with finding and helping Roland Argenson, who is on Conflux Mountain to gain Mana. 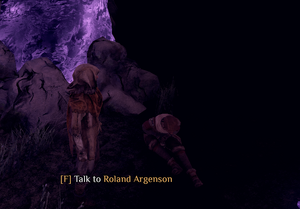 Head to Conflux Mountain in Chersonese, and enter Blue Chamber's Conflux Path. From the entrance, take the first left, and then left, right and right to arrive in the room with a Mana Mantis. Defeat the Mana Mantis and speak to Roland, who will tell you to meet him at Conflux Chambers. The dialogue options here do not impact the outcome.

Find Roland at the peak of the Conflux Chambers, near the Ley Line. Roland has spent a large amount of Health and Stamina on Mana, and is severely exhausted, though he is wielding a Great Runic Blade.

Roland will ask you to assist him in traveling to Starfish Cave. 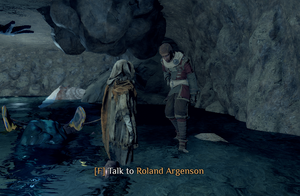 Head to Starfish Cave between 10pm and 4:59am to reach the lower area which is normally hidden by the high tide. You will find Roland and a Mantis Shrimp in the cave. Defeat the Mantis Shrimp and talk to Roland.

If you don't have any Blue Sand, pick up one in the cave before you leave as we need one for the next step.

Speak to Gabriella in Berg. She needs us to prove ourselves in combat, by defeating a unique green Shell Horror at the Cabal of Wind Temple, in the south-west of Enmerkar Forest. Speak to Roland before leaving Berg.

This is marked as "optional" in your quest log, however, you must complete this portion if you wish to receive the Lantern of Souls. Otherwise you will achieve partial success without receiving the lantern. Speak to Roland, and choose option

2: "What's wrong with your Mana? You're able to summon that sword just fine.", and then agree to help him find a trinket to control his mana. Talk to Taleron, the smith in Berg, and ask him about helping Roland. He asks for either a Large Emerald or Medium Ruby, as well as Blue Sand and a Mana Stone.

With the three items collected, talk to Taleron and give him the materials. He says that the trinket will be delivered to Roland within the hour, although technically this happens automatically. Nothing will update in your quest log to indicate that the trinket was delivered. 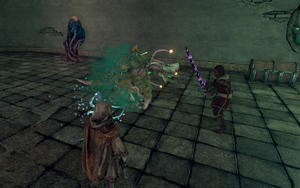 The unique Shell Horror at Cabal of Wind Temple.

Before you leave, make sure to speak to Roland and choose option

2: "It's time to kill that green horror! Meet me at the Cabal of Winds Temple." or you will tear down Roland's confidence.

Head to the Cabal of Wind Temple in the south-west of Enmerkar Forest. Climb down the rope into the dungeon, you will immediately see the locked gate in front of you with the unique Green Shell Horror, as well as Roland. Pull the lever to open the room and help Roland defeat the beast. You can pull a second lever just inside the room to close the gate and prevent other Scourge in the dungeon from joining in the fight.

Once you defeat the Shell Horror, make sure to loot the Green Horror Chitin from the corpse. Speak to Roland and choose option

1: "You carried your weight there. Good work", then return to Berg.

Return to Gabriella in Berg and present her with the green Horror Chitin. 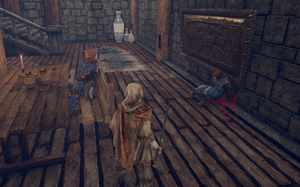 The player finds Sagard and Julius in the Inn.

Gabriella tells us to check on Julius in the Old Coin's Inn in Berg. Head into the Inn to find Sagard Battleborn at the scene, and Julius brutally murdered on the floor. Sagard tells us that Julius was seen talking with a lady in red, and that when Sagard pressed him for information, Julius "tried to take him with a dagger", and the lady ran off to the Necropolis. 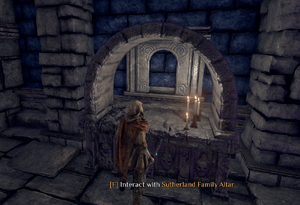 One of the Family Altars in the Necropolis.

Head into the Necropolis. If you have taken more than 40 days to reach this point there will be aggressive Ghosts, defeat them to continue. The metal door immediately on your right which is normally locked is now open. Interact with it to pass through, then walk down to the glowing purple barrier to find Gabriella. She tells us that the red lady has unleashed violent Ghosts in the Necropolis, and that had it not been for Roland - who sensed the Ghosts with his newfound affinity for the ethereal - she might be dead. She tells us to burn a Greasy Fern at the nearby Ancestral Altars.

If you need some Greasy Ferns, there are a number of spawns in one of the rooms. From Gabriella, if you take a right, and then a left, you will see a room with a Blue skull effigy and several Greasy Fern spawns.

With two Greasy Ferns, defeat the Ghost (Purple) in the hallway to reveal a secret area at the end of the hallway. Approach the altar and interact with it to burn a Greasy Fern.

Head back around towards Gabriella, and continue onto the other side of the area. There is another Ghost which you must defeat, after which a second hidden area will be revealed which contains another altar to burn a Greasy Fern at. 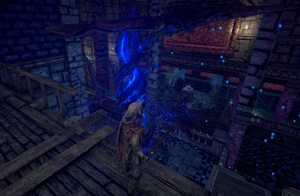 The player overlooks the Rotwood Tree and Roland.

The large purple barrier where Gabriella was standing is now removed, and you can venture down further into the dungeon. Head down and you will see a large blue tree similar to the Compasswood Tree. You can drop down below from here, and in the area below you will find Roland waiting by the Ancestral Altar. Talk to Roland and learn that a red spirit is violently entangled with the blue spirit of the Ancestral Memories, and that he is going to attempt to intervene. Choose option

1, and one of three outcomes will occur:

Return up the stairs and stick to the right, past where the barrier was, and up to Rissa on the stairs. You are given the choice to leave the Krypteia if you wish, though this does not seem to impact the story at all. Finish the conversation to complete the quest.

Regardless of your outcome, Rissa will give you:

From Roland if you help him at Starfish Cave:

From Gabriella for showing her the Green Horror Chitin: