Vendavel is a Parallel Quest in Outward.

This quest has in-game timer of 40 days, which starts counting immediately when you join a faction. If all three Warlords are not dealt with when the timer runs out, Cierzo will be permanently destroyed.

Burac Carillon informs the player of the Vendavel threat.

To begin the quest properly, speak to Burac Carillon by the gates of Cierzo after you have joined a faction. Burac will inform you of the dire threat of the Vendavel, who plan an imminent attack on Cierzo. He asks for your help in preemptively dealing with the Bandits before they are able to raid the city.

It is recommended to do the following before you go to Vendavel Fortress:

When you are ready, make your way to the south-west of Chersonese, to the Vendavel Fortress.

The player speaks to Crock.

Crock can be found immediately to your left after you enter Vendavel Fortress from the beach.

From here you have two options: a Combat path, and a Non-Combat path:

The Guards near Crock. 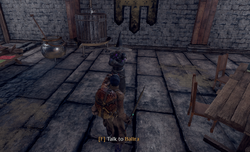 The player speaks to Balira.

After you pass through the door by the Guards, head to the right up a winding staircase and arrive at an elevator. Climb onto the elevator and pull the lever to ride it up.

At the top, you will find Balira along with two Guards. Here we have two paths, however unlike Crock, both paths involve some combat. 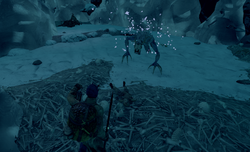 The Wendigo in Corrupted Tombs.

To deal with Rospa, you'll need access to the Prison area. If you used Eto's disguise to get into the fortress, it will be unlocked, otherwise you can use the Vendavel Prison Key if you chose to defeat either Crock or Balira.

If you do not yet have a way into the prison, you can either:

From the main corridor (near where Crock was, and where we went up the stairs to Balira), head down the opposite direction from Balira, down the stairs towards the Prison area.

Interact with the gate to enter the Prison area, then turn right down the hallway. At the end on your right there will be another Guard and a door, open the door and continue forward to Rospa.

Speak to Rospa, and once again there are two options:

Burac informing the player of their success.

Once all three Warlords are dealt with, return to Burac (after you have joined a faction) to complete the quest.

Should you reach the failure timer for this quest, you will notice this quest log in your journal instead, and you have received the "Failure" outcome.

If you defeated the Warlords with combat:

If you send Crock to Burac:

From Rospa, if you sent Eto to him within a day:

If you took longer than one day to send Eto to Rospa:

If you helped Balira with the Wendigo:

There is an Ornate Chest in the room below the Cierzo town hall, which you can now access with the Cierzo Town Key.