Up The Ladder is a Quest in Outward. It is fourth in the series of main quests, and is the first quest of the Sorobor Academy quest-line.

The first quest of the Sorobor Academy faction sees the player working their way up through the ranks of the Sorobor Academy. What starts out as a few simple errands very quickly demonstrates the harshness of the Antique Plateau, and the lengths certain members of the Academy are willing to go to in order to make it out here. 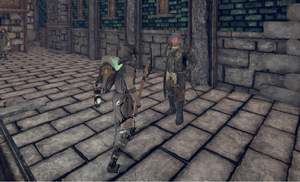 After some busy-work, the player speaks to Victor.

The beginning of this quest involves picking a Dean to do some busy-work for. You can choose one of three options, simply do whichever one is easiest for you. You can continue doing more work for other Deans after the first one if you want, but it is not mandatory.

Speak to Victor Berthelot, Dean of the Military in the Military district in eastern Harmattan about doing some work. He will task you with two objectives: to help Artois Sutherland retrieve a stolen package from some bandits, and to help Desy Laroche retrieve a delivery from the Abandoned Storage room. 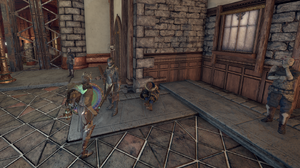 The player confronts the Kazite Bandits in the Abandoned Living Quarters.

Head to the Abandoned Living Quarters in north-west Antique Plateau (which is accessible via the Runic Train system if you have unlocked it). Artois is directly ahead from the exterior Antique Plateau entrance, or at the top of the dungeon if you used the train.

Speak to the non-aggressive Bandits here and you have two options.

Get 5 Jerky (regular only), 1 Waterskin, 1 Iron Claymore and 1 Iron Halberd and give these items to the Bandits. There is likely a time-limit on this.

Simply defeat all three bandits to complete this section. You do not need to talk to Artois afterwards. 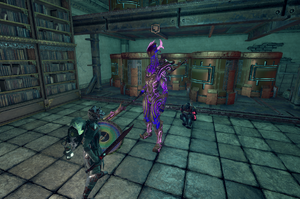 The player speaks with the Butcher of Men.

Head to the Abandoned Storage, east of the southern exit of Harmattan in Antique Plateau. Inside you will see a brightly illuminated Immaculate ahead, the Butcher of Men, who is not aggressive for now. Speak to him and he will fill your glass vial with his blood as Victor requested.

Desy regains consciousness and urges us to attack the Butcher, as she believes he is too dangerous to allow him to leave. You have the option of letting him go or fighting him.

If you choose to fight him, you must defeat him in combat without the help of Desy. The Butcher is weak to 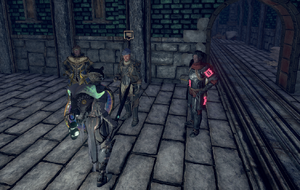 Victor, Artois, Desy and the player speaking at the end of the quest.

After completing both tasks, return to Victor Berthelot, Dean of the Military in Harmattan to complete the quest.

From Victor (defeated Butcher and helped Artois in time, did not open package):

If you opened the package you will only get 1 Gold Ingot instead.