Truth and Purpose is the third faction quest for The Holy Mission of Elatt in Outward, and sixth in the series of main quests.

Part of this quest has a timer of 3 days. After Elatt's speech, you have 3 days to find and convince the Rebel Priests, otherwise you will automatically receive the "Failure" outcome.

To obtain the Radiant Wolf Sword, you must fail to convince the Priests and not reach this timer.

Oliele has gone to Abrassar to learn about Elatt's history, hoping to ease her doubts about the Holy Mission. Ellinara and Elatt ask us to keep an eye on Oliele, as Elatt senses she is on the verge of a major discovery.

Speak to Ellinara in Monsoon. She asks us to go to the Slums of Levant to track down Oliele and help her with her mission to unearth Elatt's history. 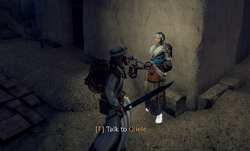 The player speaks to Oliele in the Slums.

Head to the Slums in Levant. The fastest way from Monsoon is by heading down to the south-east of the Marsh, you can either pass through the Spire of Light or the Ziggurat Passage, or simply run across the swamp water if you have enough health potions or decay resistance. Otherwise you'll need to head to Chersonese, then to Enmerkar Forest, then to Abrassar.

Either way, make your way to the Slums and speak to Oliele, found right near the entrance from the main Levant city area. She tells us she has three good leads to find out about Elatt's history, and asks us which one we are interested in.

You only need to investigate the Stone Titan Caves, however you may investigate the other options if you want to learn more about Elatt and the Abrassar region's history.

The player speak to Oliele in Ruins of Old Levant.

If you choose to investigate the Old Levant, you can head through the main gates to Old Levant (it is now unlocked) and find Oliele leaning against one of the buildings in the main area. Take caution as there are several aggressive Bandits in the area, including Luke the Pearlescent.

Oliele tells us that she learned the Old Levant mages sensed a great surge of the Ley Line (Stone Titan Caves) around 100 years ago, and then felt it completely disappear. She suggests checking out the Stone Titan Caves, but you also have the option to investigate the Garden.

If you choose to investigate the Garden, head to The Walled Garden in eastern Abrassar. There are several aggressive Golems in the area, so take caution. Oliele tells us that this location actually has nothing to do with Elatt. It was once the home of a Lich called the Garden Lich who is protecting it with a magical spell he cast long ago. She suggests investigating the Stone Titan Caves. 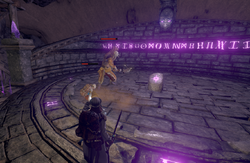 Oliele and the player fight an Ash Giant Priest.

Meet Oliele at the bottom of the Stone Titan Caves. You will find her along with an aggressive Ash Giant Priest. Help Oliele defeat the Giant, then speak to her.

Oliele says she has found a strange Stone Tablet. She's not sure what it says, but she thinks that Mofat might be able to translate it, or perhaps a Soroborean Caravanner.

Note: the tablet is not an actual item, it will not appear in your inventory. 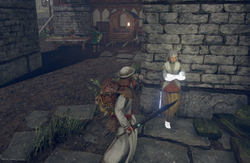 Oliele and the player discuss the revelations from the tablet.

If you have completed Purifier, you can get the tablet translated for free by Mofat. Simply ask him to translate it for you, and he will do so instantly.

Otherwise you will need to pay a Soroborean Caravanner 150

silver for the translation. The Caravanner says that he was given a similar tablet recently by "an adventurer", referring to the events of Mouths to Feed, and that he could use it to translate this one as well.

Talk to Oliele and you two will read the translation together. You learn some dramatic revelations about the Cabal spell which caused Elatt's ascension, and by the end of it Oliele is unsure what Elatt even is anymore. She suggests heading to the temple and speaking to Elatt directly.

Head into the Monsoon temple up the large steps and speak to Oliele, and a conversation will begin with Elatt. He explains everything, and Oliele is convinced of the Holy Mission's righteousness once again. Elatt asks us to track down the Rebel Priests who Oliele had convinced to doubt Elatt, and now convince them once again to believe in him.

For a transcript of the Stone Tablet translation and Elatt's explanation, see this article.

Oliele, Soeran and the player negotiate with the Rebel Priests in the Hollowed Lotus.

Note: at this point, a timer of 3 days begins to find and speak to the Rebel Priests. If the timer is reached, the events of this section will take place without you, and you receive the failure outcome (but you do not receive the Radiant Wolf Sword).

Find Oliele and Soeran inside the Hollowed Lotus, just south of Monsoon, and negotiate with the Rebel Priests. From here, there are two major paths which diverge.

Option 1: Convince the Priests
This outcome will result in a full success - you are promoted to Champion, Oliele does not leave the Holy Mission, and you get all the rewards associated. Note that you cannot acquire the Radiant Wolf Sword on this path.

Speak to the Rebel Priests, and choose the following options:

Note: if you choose only 1 of these correct answers, you receive a middle-ground "Partial Success" outcome instead. This is arguably worse than the Failure outcome, however.

Option 2: Do not convince the Priests
This option will result in the "Failure" outcome, but you can acquire Oliele's Radiant Wolf Sword this way.

Note: Combat will begin after you answer all of the questions incorrectly, so make any preparations for that now.

Speak to the Rebel Priests and choose option

3 every time, then defeat them in combat with the aid of Sorean. Afterwards, Oliele will tell you she is leaving the Holy Mission permanently, and gives you her Radiant Wolf Sword (unless you reached the failure timer, or were defeated). 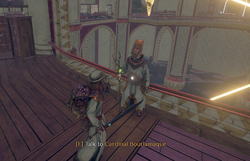 The player is promoted among the ranks of the Holy Mission.

Following the events in the Lotus, head back to Monsoon and speak to Cardinal Bourlamaque in Monsoon's temple. Depending on your success with the Priests, he will promote you to either Templar or Champion.