Tending the Flame is the first faction quest for The Heroic Kingdom of Levant in Outward, and the fourth in the series of main quests.

After the player gains citizenship either through Cyrene or Baron Montgomery, Cyrene will task the player with serving as a bodyguard for Kirouac, one of Levant's ambassadors. Kirouac has been sent on a diplomatic mission to resolve an issue involving Old Levant, The Blue Chamber Collective, and The Heroic Kingdom of Levant, also known as New Levant. 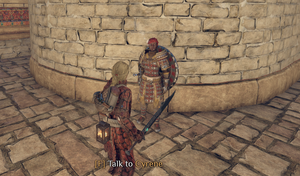 The player talks to Cyrene in Levant.

Talk to Cyrene in Levant. She will inform you that you are to serve as a bodyguard for Kirouac, one of Levant's ambassadors who has traveled to Berg. Cyrene tells you to meet her at the Blue Chamber in Berg, and attend the council meeting.

Head to Berg in the Enmerkar Forest and enter the Blue Chamber building, where a meeting is taking place. 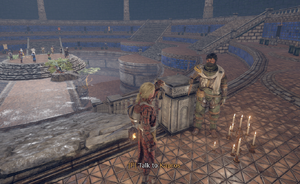 The player talks to Kapros in the Blue Chamber

Talk to Cyrene in the Blue Chamber building first. This is important, if you don't talk to her she may not appear back in Levant.

Talk to Kapros at the top of the stairs back near the entrance, and he says that there is information in the archives which is highly important regarding Old Levant's claims. You have a choice between two major branching options. 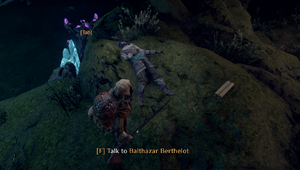 This section is optional, and it is only possible to complete if you did not prevent the attack. If you did prevent it or if you don't want to do it, skip to the "Burnt Outpost" section.

If you did not help Kapros, head back into the Blue Chamber to find Sagard and Gabriella fighting two Bandits. Help them or wait for them to defeat them, and then talk to them. After the conversation, head down into the Necropolis.

From inside Necropolis, climb up the ladder into Ancestor's Resting Place. In the first room you find yourself in there are two aggressive Bandit Slaves, who can easily be ignored. There is a lever at the end of the room which opens up the metal door. It gets very dark, so light a lantern or torch for the next section. Head to the left past some Assassin Bugs until you reach a sheer cliff. You can safely drop down into the water below, where you will find an aggressive Mana Mantis and various Bandits. All you need to do here is quickly read the note next to Balthazar to progress the quest. You will then need to find your way out either by heading back up towards the Bandit Slaves, or via the other exit which leads to the area north of Berg. 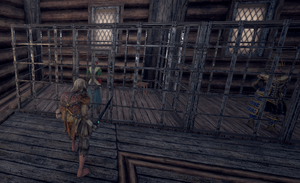 Rissa and Kirouac trapped in cells.

Head to the Burnt Outpost in south-eastern Enmerkar Forest, south of the 'Huge Burning Tree' marker. Take caution as there are aggressive Burning Men and an Obsidian Elemental in the area. Head inside the large wooden building towards the back of the camp.

Inside, defeat the two aggressive Bandits. If you are defeated, you will simply wake up in the exterior of the camp and have to try again.

If you did not prevent the attack, talk to Rissa and Kirouac to free them from their cells. Rissa will reward you with 1 Gold Ingot.

Report to Cyrene in Levant to complete the quest.