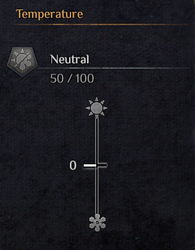 The Temperature display on the Needs menu, currently at Neutral.

Temperature is an Attribute and Mechanic in Outward, representing the player's body temperature. If the player becomes too

cold, they will suffer various penalties, or even receive Defeat Scenarios.

So for example, if the current temperature is

Hot Weather Defense, you would be affected by +15

temperature every few seconds. On your "Needs" menu, this number is indicated on the Temperature bar. The actual amount that your temperature changes by is only a fraction of this temperature difference, but it will continue to affect you until you either escape the temperature source, manage to control it, or pass out.

The player's current temperature can be seen from the 'Needs' menu, and from the indicator in the bottom-left corner of the UI. When it falls above or below certain thresholds, the player will receive an associated Status Effect:

You can increase these stats with Equipment, as well as Effects and Skills (see below) 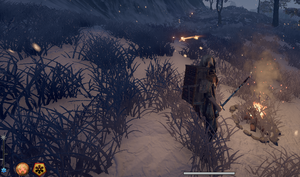 A player warms up by a Campfire.

Players can manage their temperature in a variety of ways. They may employ special clothing, eat particular consumables, or make use of environmental features.

Different regions in Aurai have different temperatures when the player is outdoors. This is the most significant way in which the player's Temperature is affected.

Seasons generally last between 25-40 days, however not all regions have seasons.

In all regions, it becomes notably colder during the night. Daytime is 5am to 9:59pm, and Nighttime is between 10pm to 4:59am.

Rain will result in the Wet status effect, and can occur in all regions except Abrassar.

Some regions in Outward also have seasons, which generally last between 15 and 20 days. However, a Season will not change until you reload the region (for example, entering and leaving a City, or by sleeping).

The current regional temperature is visible from the Map screen near the time of day, described as an adjective:

See the Weather section on each Region page for more details about the Weather in each region: