Sand Corsairs is the second faction quest for The Heroic Kingdom of Levant in Outward, and the fifth in the series of main quests.

War has been declared between The Blue Chamber Collective and Heroic Kingdom of Levant, and while the war is going well for the Heroic Kingdom it has cut them off from their usual trade routes, and the few that remain are being plundered by The Sand Corsairs. The player will be tasked with bringing the Corsair's leader to justice in an attempt to stop Levant's populations from starving to death.

Talk to Cyrene in Levant to learn that while the war is going well for the Heroic Kingdom, the city faces famine if they are not able to deal with The Sand Corsairs, who are cutting off their trade routes. Cyrene asks us to head to the Slums and investigate.

The player talks to Dawne in the Slums.

Complete one of the following tasks to gain information from the Slums: 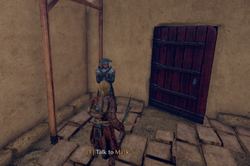 The player talks to Markus in the Slums. 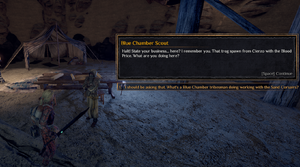 The player talks to a Blue Chamber Scout at the Ruined Outpost.

Make your way south of Levant, then west towards the Ruined Outpost. There is an aggressive Ice Witch and Desert Lieutenant outside. Defeat them or ignore them, and enter the building.

Speak to the Blue Chamber Scout, and you have three options:

Either way, you learn that the Corsairs loot incoming food caravans, and then give this food to the Blue Chamber Scouts to deliver to the Slums. The idea was to starve Levant, and use offers of food to try to push the slum people into open revolt. We also learn that the Sand Corsairs are operating out of the Ruins of Old Levant, in north-western Abrassar, and that it is being camouflaged by some Soroboreans as an archeology site.

Speak to Yzan in Levant. Yzan will propose an attack on Old Levant, and you suggest to go in through The Slide to cut off any would-be escapees. 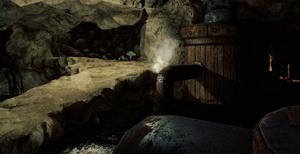 Head to the main entrance of The Slide, a short distance west of the Parched Shipwrecks in the desert. Once inside, immediately take a right and you will eventually reach a locked metal door. Interact with the door to open it and continue forward into a room with several bandits.

Head up the stairs on your right and pass through the metal door into a small room. Leave through the door in this room to enter Ruins of Old Levant. 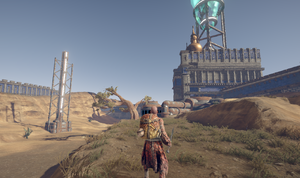 The Corsairs' Headquarters in Ruins of Old Levant.

You arrive in the desert, standing before an oasis. To your left is the main area of Old Levant, where Yzan and Cyrene along with some Levantine soldiers can be seen fighting the Sand Corsairs. Ignore them and head to the right (south) of the Oasis.

Directly south of the Oasis is the Vigil Pylon and Corsairs' Headquarters, this is where you will find the Corsairs' leader, Zagis.

Inside, defeat the two Desert Bandits to continue.

Talk to Zagis, and at this point there are two outcomes which can occur: 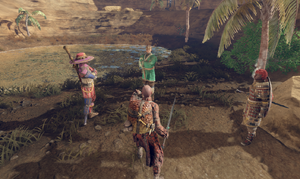 The player talks with Yzan, Clayton and Cyrene.

Leave the Headquarters, and walk a short distance forward until you get a fade out. Yzan and Cyrene will appear, along with Clayton, a Soroborean they have captured.

You have two options with Clayton, both of these options help you in Mouths to Feed, but in different ways.

Option 2: Call in a favor during Mouths to Feed.

Finally, talk to Cyrene to finish the quest and optionally take a convoy back to Levant.

If you convinced Zagis to surrender: