There are two main entrances to the Lair, which both lead into the same general area.

There is technically a third entrance: South of the map marker on a separate hill, which leads into a room with a Phytosaur, and dead Mana Troglodyte. This entrance is only accessible from inside the lair as an exit.

During the Blue Chamber quest Ash Giants, the player is tasked with finding a "rare root", known as "Obsidiroot". These roots are all near the Alpha Tuanosaur, who is nearby the top-most entrance to the Lair.

From the top-most entrance: 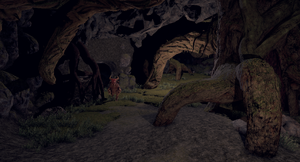 The interior of the Lair is a large, sprawling cave network. As the name suggests, many Reptilian enemies can be found inside.

The exterior portion of the lair is a large, winding hill. A path can be followed from the bottom of the hill near the entrance, right to the top.

Along the path up the mountain, players can find: