Puzzles refer to secret developer puzzles and Easter Eggs hidden throughout Outward. Not all of these puzzles can be solved entirely within the game, some involved community Twitch Streams, or references to earlier Nine Dots games.

This page does not refer to puzzles encountered during normal gameplay. For information about these sorts of puzzles, see Quests, Locations or Items depending on the puzzle you are interested in.

In addition to the puzzles listed on this page, there are currently two secret bosses in Outward:

The Unknown Arena locations are also secret boss fights, though they are generally more obvious and easier to solve than the easter egg bosses.

On Feb 3rd 2019, Nine Dots revealed the Code Sonic cryptogram. Players quickly identified four runes - Dez, Fal, Shim and Egoth, with an additional rune (A) provided by developer Gheeyom. This was the first time that players realised that runes actually made a Runic Alphabet, which now has been fully discovered.

Within the same day, users of the discord deciphered the puzzle. The message reads:

In English, this translates to "Ask us about “CODE SONIC” during a Twitch livestream". Players did just that, and the developers revealed what this puzzle was about, at 9:55 of this Live Stream.

The reward - if you name your character "Code Sonic", an option will appear in the in-game options menu to enable an enormous speed boost, which also changes the character's sprinting animation to a Sonic-like "roll".

During the aforementioned Live Stream for Code Sonic, the developers gave hints to the second puzzle a few minutes after revealing the Code Sonic easter egg. At 12:20 in the stream, Gheeyom paused while looking at a certain Runic Message on a wall:

In English, this translates to "We Wake Up Troglogo". During the same Live Stream, a mysterious account called "Troglogo" left a series of messages with strange spelling mistakes. Players combined each mistake and found that it revealed a link: imgur.com/HfUiRf2. This link leads to a second cryptogram.

This one is a bit trickier. Feu translates to Fire, however Pilosiv does not translate to anything. The bottom line translates to "How can we get this?". This puzzle actually references both of Nine Dots' previous games - Brand and GoD Factory.

Pilosiv refers to a specific item in GoD Factory, called Pilos IV. The "Fire" (Feu) attribute on this item is 15, which will be important soon.

The second half of the puzzle ("How can we get this?") refers to the image of Brand at the bottom. To get this particular sword (in the original Brand game), players must achieve Refinement level 5 and Strengthen level 3.

Aided with consistent comments from developer Gheeyom asking "What time is it"?, players guessed that 15:53 is the correct time, and Gheeyom confirmed.

Players discovered that the solution was to interact with the Fish Statue in the middle of Cierzo at 15:53 (3:53pm) to obtain a secret Pet.

The Compass Puzzle was the final puzzle to be solved by the community. The only hint that was given to the community for several months was "the Outward logo".

After much fruitless searching and dead ends, players were given a hint from developer Wady Blue, who revealed: "I can confirm there is a trigger in each region and in each region, its always outside (not in dungeon neither in cities). Have to do the correct order and you might need some useful tool to help you like bow and arrow or lot of gabberies".

Players speculated that perhaps this might mean there is something in the sky you have to shoot (with a bow and arrow), or that reaching the trigger might require a lot of gaberries for Stamina. While investigating the peak of Conflux Mountain, a few individuals discovered that there was a mysterious invisible object in the sky, and that it was actually possible to reach it by climbing the metal spiral which ascends above the peak of the mountain (on one of the two spirals, the one which ends further north).

Indeed, reaching this peak and walking true north (like the Compass logo) along the invisible path will eventually lead you to a hidden trigger, which teleports the player back to the top of the mountain and cues a laugh sound effect. The bow and arrow turned out to be handy for this too, as players used it to shoot ahead and find where the narrow path's boundaries were. It was later discovered that you can also just start to deploy a Campfire Kit and use the indicator to tell if you are staying on the path - it turns red if the ground is too unstable, in this case indicating that you are veering off the path.

From here, the remainder of the puzzle fell into place quickly. The next step can be done in either Enmerkar Forest or Hallowed Marsh, and similarly required the player to find the tallest point on the map (Cabal of Wind Temple and Reptilian Lair respectively), and walk true north from the peak until they reach the trigger. Finally, at the peak of the mountain near Stone Titan Caves in Abrassar, an invisible path leads the player up the giant sword, then true north from the tip of the sword to the final trigger.

Rinkuji had already found what he suspected to be the final location during earlier searches, and this assumption was correct. The Heroes Palace upper area contains a bountiful loot for the player (100 Gold Ingots), as well as a unique dancing NPC. Upon leaving this room, if the player had claimed the Ingots, the wooden bridge will disappear with a final laugh, concluding the easter egg.

For a full explanation of the solution and to see the final rewards, check Rinkuji's video.

The Lost Trog Puzzle occurred around the release of

The puzzle began with Gheeyom leaving cryptic messages in the #puzzle-solvers chat of the Outward Discord, starting with simple :trog: emotes, and evolving into Morse code messages. Gheeyom left many such "Trog-Morse" code messages which all seemed to indicate that a Trog needed help, but other than understanding this, players were unsure where to go next.

The image from the announcement containing the Morse Code clue

An image was found on the announcement page which had a strange Morse code border around it. This code reads "Trog perdu trouvez couleur" (Fr. Trog lost, find color). 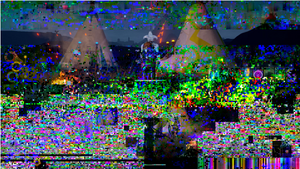 A "glitched" image was found along with the Announcements, and players identified that the color 7D9BD7 could be found in a few distinct places throughout the image - in fact the Gemini constellation is hidden in the image.

The Gemini constellation is represented by the twins, Castor and Pollux, known as the Dioscuri. These two stars are the most prominent squares in the glitched image with the color code.

During the DLC preview stream, two users named c45t0r_9 and p4ul_lux were talking in the chat about how they are going to enjoy the DLC together. Players added them as a friend and sent them a message, to which they responded: "Should fifty uninterrupted voices in disharmony call the spawn of a Queen, surely it would be heard".

50 members of the Discord did the :trog: emote without interruption in the #puzzle-solvers chat, and Gheeyom responded:

Solution: Put a Common Mushroom in a Legacy Chest, and start a new Legacy character which inherits the mushroom. When you start the Character, you will play as a Troglodyte.

This puzzle was solved by: Rinkuji, Schnabeldoktor, Neoras, 2Tabz, Ceveth, phyrak, Erehwon, Clegg, and everyone who contributed a :trog: to call the spawn of a Queen. The solution was discovered by a player named Kek.