Purifier is a Parallel Quest in Outward.

This quest has a timer of 35 days, which begins at the start of the quest. Failing to complete the quest in this time-frame will result in an immediate failure.

Additionally, this quest will also be failed if you have not completed it by the time you reach your third faction quest, and wait the 3 days. 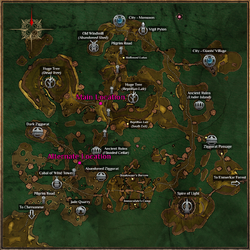 A map of the White-Clad Missionaries' locations. Click here for the full size image.

In order to begin Purifier, you must have joined a faction. There are three possible ways to begin the quest from that point: 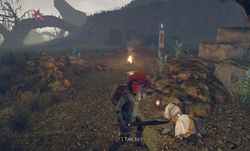 The player finds the White-Clad Missionary.

The White-Clad Missionaries can be found in the Hallowed Marsh along the Pilgrim Road, marked by the glowing Sun Pillars. You will see a campfire, a Broken Tent, and various litter along with the corpses.

Refer to the map above to see exactly where the Missionaries can be found. The main location is west of Reptilian Lair.

If it has been 5 days since you have been in the Marsh after you joined a faction, the Missionaries will be found at the alternate location further south near a dead Stekosaur.

Find the Missionaries and interact with the corpse to progress.

Note: this section is optional, and does not impact the outcome of the quest.

Speak to Mofat in Monsoon, and choose option

2: "Talk about the trouble in the swamp". You tell Mofat that the corpse was found near 3 bedrolls, to which he replies that this means there must have been other travelers. He thinks that the missionary was likely traveling with Amalie and Alemmon, the Philosopher trainer. He suggests speaking to him for more information.

Talk to Alemmon about the trouble in the swamp, and he will tell you that indeed he was one of the missionaries who were attacked. He tells you they were taken to a "mountain not too far from the campsite", to the west. He also says it was a "large network of tunnels [...] burrowed by tree roots."

Alemmon is referring to Dead Roots, in the north-west of the Marsh, which is where we will need to go to investigate.

The top entrance of Dead Roots.

Make your way to Dead Roots in the north-west of Hallowed Marsh. It is recommended to use the top entrance, not the bottom entrance, although if you are already familiar with the dungeon then it makes little difference.

When you are approaching Dead Roots and reach the top of the hill, turn left instead of continuing forward, and head up to the tree on the very top of the hill. This is where the top entrance is, head inside.

From the top entrance of Dead Roots, we will need to collect three pieces of evidence. However, collecting all four notes is recommended if you wish to obtain the Glowstone Backpack or enter Dead Tree.

At this point, you can leave if you wish. However, there is also a fifth note implicating Jager Sullivan, which can be found in Dead Tree.

With at least three notes of evidence collected, you can leave Dead Roots.

It is optional to talk to Lockwell about this, but it will bolster the security of Monsoon, which will help you in your final faction quest.

If you wish to talk to Lockwell, simply head to Monsoon and speak to him about the trouble in the swamp.

Make your way to Berg in Enmerkar Forest. At this point, you can choose who you would like to hand the evidence to. The outcome of your success is determined by who you choose (see Outcomes below).

If you spoke to Lockwell about the evidence:

Depending on who you hand the evidence to:

Members of the Holy Mission will also receive on success:

Sorobor Academy members must hand the evidence to a member of the Academy: