Looking to the Future

Looking to the Future is the third main quest in Outward.

Following the events of Call to Adventure, Rissa informs the player that Yzan and Oliele are leaving. Oliele is leaving to join the Holy Mission, and nothing Rissa could say would convince her to stay. We learn that Roland was the cause of the shipwreck, having fallen asleep while on duty at the lighthouse. While Roland accepts the Blood Price placed on his bloodline as consequence, Yzan does not, and is leaving to join the Heroic Kingdom.

Rissa tells the player to speak to Oliele and Yzan, and then to discuss your future in Cierzo with her afterwards.

Finishing Up in Cierzo[edit | edit source] 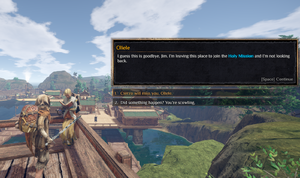 After talking to Rissa, we are instructed to speak to Oliele and Yzan before they leave.

Oliele can usually be found either by the lighthouse, or near Loud-Hammer by the town center. Oliele tells us that if we want to join her in the Holy Mission, we should follow the pilgrim road marked by luminous sun-pillars to the Hallowed Marsh.

Yzan can be found on the beach to the north-east. He tells us that he is leaving to join the Heroic Kingdom in Levant, and that he will be taking a barge as far as he can and then making the rest of the journey by foot. He says he doesn't have enough room for us to come along, but if we have the courage to make the journey on foot he will be waiting for us.

After speaking to Yzan and Oliele, return to Rissa, who will either be found at the Town Hall, or by the lighthouse. Rissa tells us that she is leaving to Berg to attend to important matters with the Blue Chamber. She also offers to pay off our Blood Price completely if we agree to join the Blue Chamber and help her in Berg.

Tip: speak to Roland Argenson on the western docks before you leave. This is most important for players who plan on joining Blue Chamber.

You are now free to explore as much as you like and decide which path you would like to take: either Berg to join Blue Chamber, Levant to join Heroic Kingdom, or Monsoon to join Holy Mission.

There is no timer for this section, so take as long as you need to figure out what you'd like to do. You can complete the small tasks for joining each faction and receive the various item rewards without committing to any faction. 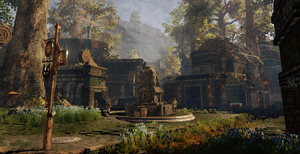 The city of Berg

To join the Blue Chamber Collective travel to the city of Berg in the Enmerkar Forest. Once there, speak to Rissa who will then tell you that she needs approval from another family in order to adopt you into the Aberdeen Family.

You can complete one or more of the following tasks to join the Blue Chamber:

After completing one or more tasks, you may talk to Rissa and officially pledge yourself to the Blue Chamber. If you do, you will be rewarded with the Cierzo Town Key. 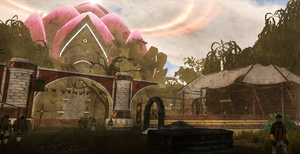 The city of Monsoon

To join the Holy Mission, talk to Oliele near the entrance to Monsoon in the Hallowed Marsh. If you express interest, she will tell you to speak with Cardinal Bourlamaque in Monsoon's temple.

Talk to Cardinal and choose option

2: "I'm curious about joining the Holy Mission", and

2: "I'm not afraid of any of that". The Cardinal instructs you to do a small task for Zephyrien, Damian Lockwell, or Mofat.

You can complete one or more of the following tasks to join the Holy Mission:

After completing one or more tasks, you may talk to Cardinal Bourlamaque again, and then pledge yourself to Elatt by the altar in the temple. The altar can be found around to the north. 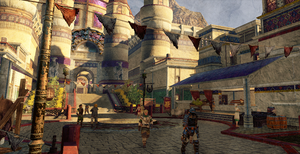 The city of Levant

To join the Heroic Kingdom, the player must travel to Levant in the Abrassar Desert, which can be accessed via Enmerkar Forest.

Speak to Yzan, and choose option

2: "I want to join Levant". After speaking with Yzan, the player will either have to complete a small task for Cyrene or Baron Montgomery.

You can complete one or more of the following tasks to join the Heroic Kingdom:

After completing one or more tasks, you may talk to Queen Calixa in Levant's Palace to pledge yourself to the Heroic Kingdom.