Heroic Peacemaker is the final faction quest for The Heroic Kingdom of Levant in Outward, and seventh in the series of main quests.

This quest has a timer of 10 days, which begins counting after the Abandoned Docks section with Yzan. Failing to stop the coup in time will potentially make you unable to receive full rewards.

While you were dealing with Levant's food shortages, the war with the Blue Chamber Collective has continued. Elatt has intervened, demanding peace. While the Blue Chamber and Levant's ruling class have agreed, some of the military including Yzan and Cyrene feel too emotionally invested in the war to let it go, and Calixa fears they may be planning a coup. Martial Law has been declared in the palace, and Calixa tasks you with tracking down Yzan and Cyrene before it is too late, while also dealing with the matters in Monsoon. 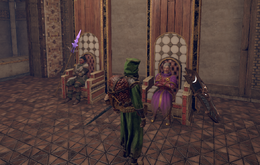 The player speaks to Calixa and Simeon in the Heroes' Palace.

Speak to Calixa to learn that the Blue Chamber has agreed to the cease-fire declared by Elatt. While this is a relief, Yzan and Cyrene are too invested in the war to lay down their arms so quickly, and are not ready to make peace with the Blue Chamber after all they have been through.

A note was found in Yzan's house which implies he has gone to "where the boats used to be tied, high and dry". This is the Abandoned Docks the northern Abrassar. Calixa asks you to investigate these matters urgently as she fears a coup is being planned. 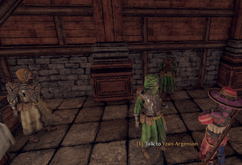 The player speaks to Yzan at the old docks.

Before you leave Levant, you should stock up on some supplies if you need to, as you will be unable to re-enter Levant for a short time.

Make your way to the Dock's Storage (Abandoned Docks) in northern Abrassar. Inside, you will find only Yzan (not Cyrene) with two other bandits. Speak to Yzan and you have two options:

Convince Yzan to leave the coup:

After the conversation, combat will begin. If you failed to convince Yzan you will need to fight him too, otherwise he will be your ally.

After the fight, you need to make your way back to Levant. However, Martial Law is in effect, so we'll need to find another way inside. 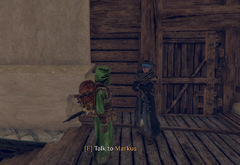 Markus is blocking the entrance to the Slums.

From the entrance of Levant, head around to the right (south) and towards the wooden structure on the side of the city. Inside you will find Markus guarding the door. 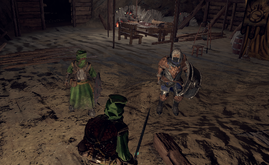 The player fights the unique Bandit in Sand Rose Cave. 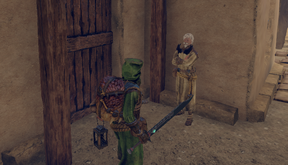 The player speaks to Pigeoneye in the Slums.

Once you gain access to the slums, head straight ahead (north) and then left (west) towards Pigeoneye (who is not in his usual location). Speak to Pigeoneye and he asks for a Tripwire Trap and Iron Spikes to take care of the nearby guards. Give these items to him to continue the quest.

Note: If you reached the failure timer for Mouths to Feed, Pigeoneye is obviously dead and you cannot speak to him. Instead, give a Waterskin to the guards in front of the Undercity Passage. 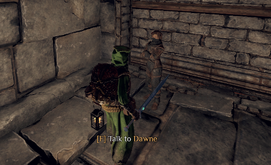 Once the guards are dealt with, enter the Undercity Passage via the western entrance in the Slums. Head down the stairs, and then go down the short dead-end hallway with Dawne at the end.

If you defeated Zagis in Sand Corsairs:

If you convinced Zagis to surrender:

Once the secret wall is raised, head through and walk straight ahead to the doors, and enter Levant Palace. 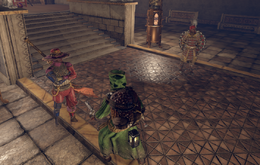 A coup in the Palace.

Note: At this point, if you reached the 10 day timer, Calixa and Yzan will not be here and you will fail this section.

Inside, you will find Cyrene and potentially Yzan (if you convinced him to leave the Coup, or if he defeated you). Simeon is crouched over Calixa, as she has been shot by Cyrene with a poison bullet.

Speak to Cyrene or Yzan to begin combat. If you convinced Yzan to leave the coup he will be your ally, otherwise you will have to fight him too (unless you defeated him earlier in the quest). 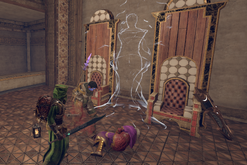 Elatt appears as a phantom to save Calixa.

When the coup is stopped, speak to Simeon. A phantom of Elatt will appear. Elatt offers to save Calixa's life if the Heroic Kingdom agrees to peace, and Simeon obliges. In order to save Calixa, Elatt will need to ascend her into Living Thought, which will effectively make her the Goddess of Levant.

In order to do so, Elatt will need to perform a ritual in Monsoon which will attract all nearby Scourge, and will need all the help he can get. Take the convoy to Monsoon or travel there in your own time for the final battle.

If you decide to take the convoy to Monsoon, your backpacked won't be moved with you if you dropped it before fighting Cyrene. 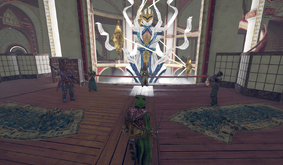 In Monsoon, run forward to the long steps, then up into the temple. Speak to the leaders to begin negotiations.

Defeat the Scourge beasts in the city of Monsoon.

Speak to Simeon to complete the quest.

From the negotiations, depending on the player's progress during the entire four Heroic Kingdom quests: