Hallowed Peacemaker is the final faction quest for The Holy Mission of Elatt in Outward, and seventh in the series of main quests.

There are two timers in this quest, related to different sections. After the Levantine Agents section, you have 30 days to make peace and stop the coup, and then 7 days to finish the quest from that point.

The war between the Blue Chamber and the Heroic Kingdom has continued while you have been dealing with the matters of the Holy Mission, and the Holy Mission's neutrality in the war is at risk. Elatt has demanded a cease-fire, to which most have obliged, however there are still some holding out on peace. Lockwell has been hiding some Levantine agents in an ancient ruin, and has been coordinating with Sagard Battleborn to torture them for information. You will need to help solve this issue while also helping to make peace between the Blue Chamber and the Heroic Kingdom. 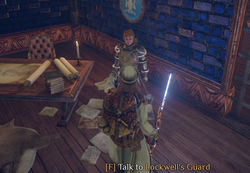 The player interrogates one of Lockwell's guards for information.

Speak to Cardinal Bourlamaque in Monsoon's temple. He tells us that Soeran discovered a pair of spies from Levant in the inn and took them into custody for questioning, but they've since gone missing.

He guesses that they must have been taken into the swamp, and urges us to find them before something happens to them.

Note: If you wish, you can skip ahead to "Levantine Agents", this section is not actually required.

Speak to Galira in the training area, and she will mention that "The agents from Levant, right? They were moved in the dead of night, I don’t think anyone saw where they went. But I saw Damian Lockwell’s bodyguard cleaning swamp stains off his armor the morning after. It could be coincidence, or it could be a connection.".

Head to Lockwell's building, and interrogate his guard in the back room. You can either threaten him if you are a Champion of the Holy Mission, otherwise you will need to bribe him with at least 50

Either way, he tells you that the agents were taken to the Flooded Cellar, in the center of the Marsh near some ancient ruins.

The player frees the Levantine agents from the Flooded Cellar

Head to Flooded Cellar, and inside you will find several aggressive bandits. Dying to these bandits will result in negative outcomes at the end of this quest, so take care and make sure you defeat them all. There are more bandits down below the main area as well.

After all the bandits are defeated, pull the lever to open the cells and speak to the Levantine agents. They will thank you, and give you a hint about Levant (that the Undercity Passage can be accessed from outside the city, south of Levant).

Return to Cardinal Bourlamaque in Monsoon. He will now task you with approaching the Blue Chamber and convincing them to make peace with the Heroic Kingdom. 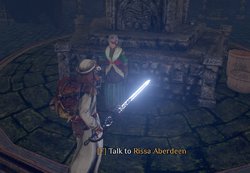 Speaking to Rissa Aberdeen in Berg.

Head to Berg in the Enmerkar Forest. In the city, speak to Rissa and ask her to make peace. She says "I wish I could promise we would be there. But Levant has burned and pillaged our land and towns, and the tribes have vowed revenge. To call off the war will require an enormous effort. I don't know how much I can do unless we compensate them well."

silver or a Writ of Tribal Favor to convince the Chamberlords. Give her either of these to continue the quest.

To convince Gabriella, you will need to give her either a Horror Chitin, a Coralhorn Bow or a Writ of Tribal Favor. Hand her any of these items to convince her and continue the quest. 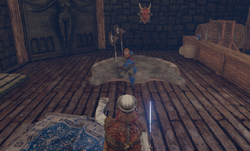 A duel with Sagard Battleborn.

Sagard Battleborn can be found in the Old Coin's Inn in Berg. Speak to him, and you have a few options: 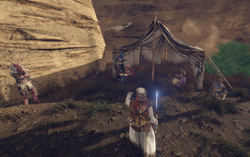 The player finds some citizens of Levant at a makeshift shelter near the Oasis.

With Berg sorted, it is time to head to Abrassar. When you enter the desert, some of the citizens of Levant can be seen on your left, including Smooth, Suul, Jaimon, Styx and others. You can optionally speak to Smooth here for a tip, and also buy items from any of the Merchants should you need to.

Smooth says "Someone from the Holy Mission! Elatt be praised! There's a coup happening right now in Levant! Almost the entire army has taken control of the city and are besieging the Palace as we speak!". 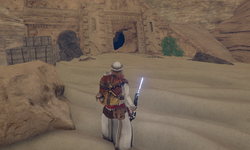 The entrance to the Undercity Passage from Abrassar desert.

On your way to Levant, you can enter the Hive Prison and speak to Zagis inside to get a free Palace Passage Key, saving a bit of time.

Head to Levant, and find that it is blocked off since Martial Law is in effect. Instead, head south of the city down the cliff to some ancient ruins below. Here, there is an entrance into Undercity Passage.

Head into Undercity Passage and immediately turn right. You will come to a narrow hallway with a wooden floor (unless you have already pulled the lever to extend the stone bridge beneath it).

If you have not done so already, in order to cross the wooden trap bridge you will need to:

Head back up to where the wooden floor trap was, and cross over the stone bridge and into the bricked area below Levant city. 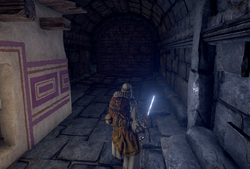 The entrance to the secret Palace Passage in Undercity Passage.

If you do not yet have the Palace Passage Key:

With the key, open the secret Palace Passage at the end of a dead end hallway in the main bricked area and head through. There are two aggressive Bandits in here, but you can simply run past them if you want, and enter the Heroes' Palace. 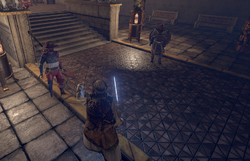 Inside the Heroes' Palace, speak to Yzan. There are two paths here:

Note: If you mugged Yzan in Cierzo at the start of the story and have poor relations with him, you may not be able to convince him even with the right options.

Option 2: Do not convince Yzan:

After the conversation, combat will begin with Cyrene, and Yzan fighting with or against you depending on your choices. Defeat your opponents to continue.

Speak to Simeon after the fight, and he tells you that Calixa has been shot with a poison bullet. A phantom of Elatt appears and offers to save her life if the Heroic Kingdom agrees to peace, and Simeon agrees.

Elatt asks us to come to Monsoon to help with saving Calixa. Simeon offers us a convoy to travel there immediately.

Saving a Queen in Monsoon's temple.

In Monsoon, head up the steps to the temple where Cardinal Bourlamaque is. Walk forward to begin the peace negotiations.

At this point, you will receive a Peacemaker Elixir and possibly also a Tsar Stone depending on your progress in the entire Holy Mission questline.

Elatt asks us to head around to the altar in the temple, to see over the ritual to save Calixa.

Here, another two options diverge. You can either:

Option 1: Do NOT sacrifice yourself

Finally, speak to Cardinal Bourlamaque to complete the quest.

If the player sacrificed themselves to save Calixa:

Depending on the player's progress in the entire Holy Mission questline: