The following is a list of Enemies in the game Outward. For other non-player characters, see NPCs. 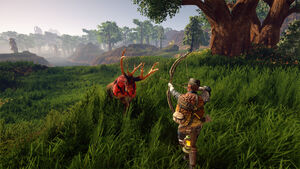 A player fights an Alpha Coralhorn

Enemies are encountered all over the world of Aurai, although not commonly in cities. They are aggressive towards the player as well as other types of opposing enemies, so a common tactic is to have enemies engage each other rather than the player, and then finishing off the fight. Enemies are a great source of obtaining many items, in fact some items can only be obtained from certain enemies.

Normally, enemies will respawn after 7 consecutive days spent outside of the scene[1]. Enemies do not respawn while the player remains in the same area, however the outdoor region areas have "Reserves" - enemies which will spawn as other enemies die, until there are no enemies left to spawn.

In general, Unique enemies and Quest enemies do not respawn.

Standard enemies can be found roaming around the locations in Aurai.

Unique enemies can generally only be fought once per play-through, they do not respawn. Many Unique enemies are quite challenging, and could be considered mini-bosses.

Outward does not have traditional Bosses as one might expect with similar games; all Boss Enemies are completely optional.

Certain NPCs can only be fought during quests. Depending on the player's chosen faction, as well as their choices in quests, these enemies may be allies or not encountered at all.

The following is a list of all enemies. This includes Bosses and Unique enemies, but does not include Quest enemies.