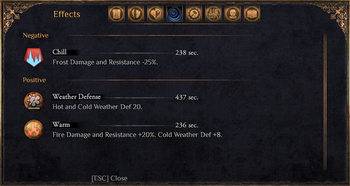 Effects (sometimes called Status Effects) are temporary or permanent conditions in Outward. Some Effects apply only to the player, while others can apply to Enemies as well. Use Food, Potions, Skills or Equipment to gain, inflict, or remove effects.

Buildup is an aspect of on-hit effects, most commonly Hex and DoT effects inflicted by Weapons, Enemies and Skills.

In order for an Effect to be applied, it must reach 100% buildup. If the effect is applied again when the target is already inflicted, it will refresh the timer on the effect.

Each time the on-hit effect registers, the buildup from the source is added to the current total, until it reaches 100%. So for example a Weapon which has an effect with 60% buildup, it will takes two hits to apply. For a skill with 15% buildup, it would take 7 hits to apply.

The Three Brothers DLC, items and effects can grant

Status Effect Resistance. This resistance is to the Buildup (see above) of the Status Effect.

The stat reduces the build-up of status effects as a multiplier. That means that if you were inflicted with 50% Buildup of a Status Effect and you had 10% Status Resistance, it would reduce the Buildup to 45%.

For sources which do not have a buildup %, they will only be resisted if you have 100%+ resistance.