Doubts and Secrets is the second faction quest for The Holy Mission of Elatt in Outward, and fifth in the series of main quests.

This quest has a timer of 30 days, which begins when you arrive at the Blue Chamber meeting. Failing to free Oliele from Lockwell's prison in this time will result in reduced rewards, and Oliele being moved to a new location, at Flooded Cellar.

While you were investigating the Corrupted Tombs with Oliele, a number of important political matters have arisen. The people of Sirocco are requesting immediate immigration into Monsoon, as a volcano near their settlement is dangerously close to erupting. As well as this, tensions have stirred between the Blue Chamber and the Heroic Kingdom, with the Sand Corsairs demanding control over the Abrassar region. It is your task to assist Oliele and Zephyrien in Berg to attend to these matters and make sure nothing happens to the Holy Mission representative, Mathias.

The player arrives at the Blue Chamber.

Travel to Berg, and enter the Blue Chamber building. When you arrive at the scene, you will find that an attack on Berg has occurred, and you see Sagard and Gabriella in the center of the chamber, along with Oliele.

Speak to Oliele, and she tells you that Zephyrien has gone missing for several days now, and that he was last seen traveling to the south-east of the forest in search of a kidnapped ambassador. She also tells you that she is going to run back to Monsoon to alert Cardinal Bourlamaque on what has happened, and that you should go look for Zephyrien.

Zephyrien has been shot with a toxic bullet.

Zephyrien can be found at Forest Hives in the south-east of Enmerkar Forest, with an aggressive Hive Lord. Specifically, if you enter the southern-most entrance to Forest Hives, he can be found a short distance forward in the first main area, sitting on the ground.

Speak to Zephyrien, and he tells you that he has been shot with a toxic bullet. While Elatt has blessed him with light, it is not enough to stop the spread of Corruption, and Zephyrien's body is beginning to grow red and green tumors. There is nothing you can do for him, and Zephyrien collapses, drawing his last breath.

This section is optional, and no instructions are given to the player to visit the Burnt Outpost in southern Enmerkar Forest. However, if you do, you will find Rissa Aberdeen and Kirouac inside.

The player attempts to reason with Damian Lockwell.

Make your way back to Monsoon and speak to Ellinara. She tells you that Oliele has been arrested for accidentally crippling one of the older missionaries, underestimating her newfound power from Elatt's light. Damian Lockwell has locked her up in his prison and is refusing negotiations. Ellinara asks you to speak with him and try to reason with him.

Note: if you have taken more than 30 days to reach this point after the attack on Berg, you will need to rescue Oliele from Flooded Cellar (see below).

Speak to Damian Lockwell in the north-west of the city. You have several options here.

After any of the options above, speak to Oliele in the cells in this building to free her. She tells you she is traveling to the Slums in Abrassar to learn more about the history of the Holy Mission. 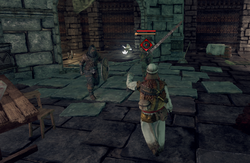 The player rescues Oliele from the Flooded Cellar.

Note: this section is only required if you reached the 30 day timer and Oliele is not found in Lockwell's prison.

At this point, you are tasked with finding Oliele. If you speak to the guard in Lockwell's prison, you can bribe him for 50

silver to reveal Oliele's location, though this is not necessary.

Oleile is being held at Flooded Cellar, a building found in ancient ruins near the center of the Marsh.

Head to Flooded Cellar, and defeat the bandits inside - note that several "waves" of bandits will spawn. Pull the lever in front of Oliele's cell to free her, then speak to her.

Return to Ellinara in Monsoon to complete the quest. At this point, outcomes vary depending on your progress in the quest. See below for details.