Chersonese is a Region in Outward. The main city of Chersonese is Cierzo. It is a mountainous, coastal region, and currently it is the only region which has snow. Common enemies in this region include bandits, pearlbirds, hyenas and mantis shrimp.

Chersonese connects to Hallowed Marsh to the north-east, and Enmerkar Forest to the south-east.

For details about the open exterior region of Chersonese (such as enemies, loot, NPCs, etc) see:

The following is a list of locations which can be accessed from Chersonese outdoors.

Minor locations are part of Chersonese Misc. Dungeons, and will show this name on loading screens. 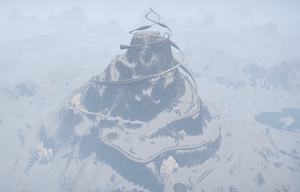 The Conflux Mountain covered in Snow from a Chersonese winter

Chersonese has the most dynamic weather system of the four base-game regions, with a unique Snowing effect which occurs during Winter.