Call to Adventure is the second main quest in Outward.

This quest has a timer of 5 days, which begins after talking to Rissa. If the quest is not completed when this timer runs out, the player will automatically receive the "failure" outcome.

After completing Castaway, you awake in the lighthouse of Cierzo. With your best hope of paying off your family's blood debt ruined in the shipwreck, you are tasked with finding another way of making the payment and saving your home.

When you step outside, you learn that your voyage lasted 4 months, and that you had visited Oroshi. 12 people died in the shipwreck, and Rissa Aberdeen has declared a period of tribal mourning. With nothing to show for your absence, the tribe demands 150

silver within 5 days, or they will take the lighthouse from you. 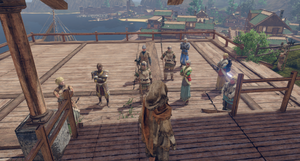 After talking to Rissa, you learn that she has declared a mourning period, buying you 5 days to pay off the debt. She also tells you that she will accept a Writ of Tribal Favor in lieu of the 150

There are many items in the lighthouse and all around Cierzo which you can take and loot from freely, as well as various gatherables. You should take full advantage of all resources available to you.

While it is recommended to acquire the Tribal Favor instead, there are many ways of acquiring silver to pay off the debt if you would rather avoid the aggressive Mantis Shrimp on the beach. Some ways include: 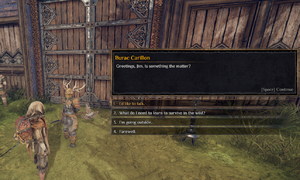 Note: if you have not yet obtained Bandages or a Life Potion, it is recommended to obtain one before you go any further.

Burac the gate warden will not allow you to leave Cierzo until you demonstrate that you are prepared to survive in the wild. Burac will teach you a free weapon skill, so even if you plan on leaving via Cierzo Storage it is recommended to get the free skill first. Burac will not teach you the free skill if you leave through the storage before speaking to him.

To demonstrate that you can survive in the wild, you must acquire a Waterskin, something to sleep in, a weapon, and a backpack.

Once you are prepared, talk to Burac and choose option 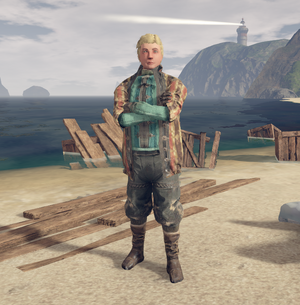 The recommended way to complete this quest is to acquire a Writ of Tribal Favor. One can be obtained by finding Michel Aberdeen on the beaches south-west of Cierzo, and giving him either Bandages or a Life Potion. You may already have bandages from Castaway, otherwise they can be easily crafted with Linen Cloth.

If you have left Cierzo from the gates next to Burac, stick to the right and follow the short path to the beach. The first fork on the right leads to a sheer cliff, so it is recommended to keep going around to the next fork unless you are confident taking the drop.

If you left through the Cierzo Storage, you will appear on the beach and can simply keep heading straight forward.

There are aggressive Mantis Shrimp scattered along the beach. Take caution as they can deal high damage. If you crouch, it is fairly easy to sneak around them and get to Michel, who is found near a giant Ammolite shell along the beach.

Help Michel with Bandages or a Life Potion and you will be rewarded with a Writ of Tribal Favor.

Return to Rissa to complete the quest. If you came through the storage you will not be able to return through the same path, so simply head up the hill to the east and return to Cierzo by heading north-west and keeping to the left.

If you managed acquire the silver or a Tribal Favor, when you talk to Rissa you will have the option to pay off the debt, completing the quest.