Blood Under The Sun

Blood Under The Sun is a Parallel Quest in Outward.

This quest has a timer of 40 days. Failing to complete the quest in this time will result in an immediate failure ("any evidence to help solve the murder will be long gone"). Additionally, the quest will be failed if you have not completed it by the time your third faction quest begins (and you have waited the 3 days).

Members of the Holy Mission who want to do this quest are advised to complete it before they return from Enmerkar Forest during Doubts and Secrets.

Eavesdropping at the Inn

A player overhears a conversation in an Inn.

Note: In order for this quest to begin, you must have reached the Attack on Berg in your faction quest line (will be during either Mixed Legacies, Tending the Flame or Doubts and Secrets).

When entering an Inn, if you walk around you will trigger a conversation between two people regarding the recent murder of Prince Jaden of Levant, son of King Simeon and Queen Calixa. You are tasked with finding the culprits of the assassination and unraveling the plot.

The fake Priest near the Oasis.

Note: this section is optional and does not impact the outcome of the quest.

If you head to the Nomad's Oasis in Abrassar, you will find the Priest standing by the water. If you interrogate him, he tells you that he was set up for the murder of Prince Jaden. He has no interest in turning himself in and is running for his life, from the Bandits who organized everything. He also reveals he is not a member of the Holy Mission at all, but rather they dressed him as a Priest to throw people off the trail.

He tells you that the Bandits are meeting at Hive Prison, and suggests investigating there.

Note: we are going to collect the clues out of order as it is much faster this way. The intended order is Hive Prison, then Burnt Outpost, then the Slums, though it makes no difference to the outcome.

The next step is to collect information about the plot. There are three locations with clues which will give us information: Burnt Outpost, Hive Prison and the Slums. There is a large scroll found at each of these locations which you must read. 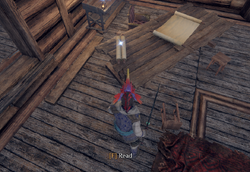 The clue at Burnt Outpost.

Head to the Burnt Outpost in south-eastern Enmerkar Forest. Inside the small building at the Bandit Camp, there is a note on the table here. Read the note. 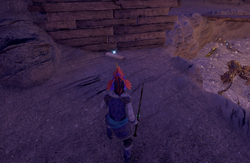 The clue at Hive Prison.

Head to Abrassar desert and make your way towards the Hive Prison, found near the entrance to Ancient Hive. On your left as you approach the Ancient Hive, you will see some ruins. Head into the ruins and there is a cave entrance for Hive Prison.

On the ground here to your left, you will see the note. Quickly read the note and run out before the Hive Lord notices you.

The clue in the Slums.

Head to the Slums of Levant. In the south-eastern corner of the slums there is a staircase leading upwards, climb up and then take a left. You will see a basket here with a note inside it - read the final note.

Now that you have enough evidence, your character will mention that you should hand this information to someone important (ie. Cyrene). 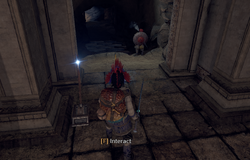 The lever in the Undercity Passage, and Cyrene.

In Levant, speak to Cyrene. You have the option of delaying the operation or joining Cyrene on the mission immediately. If you choose not to come, you have until the timer is reached to change your mind.

When you choose to join the operation, you and Cyrene will immediately enter the Undercity Passage.

Before you speak to Cyrene, pull the lever in front of you to raise the stone platform and raise the locked gate on your left, allowing access to the Baron.

Speak to Cyrene and she will tell you that all exits are blocked, and to try to find the Baron. She leaves to find Prince Pietro. 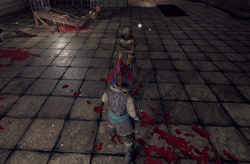 It is optional to stop the Baron, and it does not seem to impact the outcome of the quest in any way. However, you do get some free items, so there is no reason not to as well.

If you turn around from where you spoke to Cyrene and head through the newly opened path, you come to a metal gate with Baron Montgomery behind it. Interact with the gate to open it and approach the Baron.

You have two options:

Either way, once you are done, turn around and go back to where Cyrene was, then continue down the dungeon. 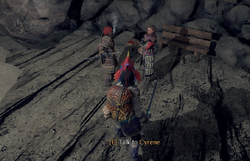 Make your way to the very bottom of the dungeon, below where Cyrene was last spoken to.

At the bottom, you find Cyrene and Prince Pietro. Speak to them and Pietro refuses to sell out any co-conspirators in the plot, and accepts his arrest with relative dignity. Finish the conversation and you will be sent back to Levant.

Speak to Calixa in Levant's Palace for your rewards.

Should you reach either failure condition for this quest (40 days or third faction quest started), you will see this entry in your quest log and will be unable to complete the quest properly.