Ash Giants is the second faction quest for The Blue Chamber Collective in Outward, and fifth in the series of main quests.

This quest has a timer of 30 days, which begins after you speak to Highlord Cyr. If you have not completed the quest in this time, you will have reduced negotiation power with Cyr and may not receive all rewards.

Following the attack on the Blue Chamber, we talk to Rissa to learn that the war with Heroic Kingdom is not going well. If the Blue Chamber is to stand a chance, they will need to recruit some help. Rissa asks you to attempt negotiations with The Ash Giants at Giants' Village, and attempt to convince them to join the Blue Chamber. 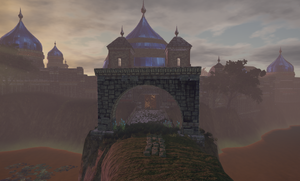 The entrance to Giants' Village

After waiting 3 days, speak to Rissa to begin the quest. She requests that we approach The Ash Giants at Giants' Village and attempt to recruit them into the Collective. She suggests trying to learn about their culture and understand their values. You will need to head north of Enmerkar Forest to the Hallowed Marsh, and make your way to Giants' Village.

At Giants' Village, approach Highlord Cyr in the raised area.

Cyr is skeptical of the worthiness of humans. He tasks you with obtaining a rare root from the Reptilian Lair to the south-west before he will begin negotiations. However, there are things we should do in Giants' Village before we leave for that. 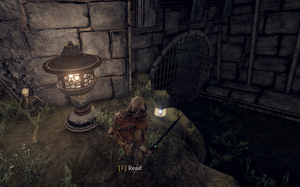 The Giant Book in Under Island

The primary objective of this quest is learning about Giant culture. Doing so will earn you negotiation power with Highlord Cyr, which will allow the correct dialogue options to appear. There are 3 specific ways to earn the majority of the negotiation power, and a few optional extra ways.

There are also a few optional extra ways to gain further influence, such as:

With the optional research completed, make your way to the Reptilian Lair in the center of the Marsh. For this guide, it is probably easier to use the top entrance instead of the bottom entrance, unless you are already familiar with the dungeon. There are many sprawling, complex hallways and it is easy to get lost.

It is only necessary to obtain one obsidiroot, however you gain a small boost to your negotiation power if you obtain all three.

From the top-most entrance: 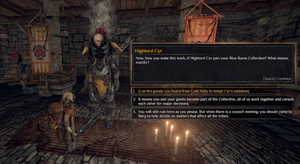 The player negotiates with Highlord Cyr

When you are ready to begin negotiations, talk to Highlord Cyr in the village.

In the debate, there are specific dialogue options which only appear if you obtained the necessary information. If you have done all the optional research, simply choose option

1 every time to use the correct answers.

If you do not see an option to "Use the information you obtained" as an answer to his question you will lose negotiation power and may not be able to convince him. In total you need 14 "influence points", and you get 3 points per correct question. If Cyr says that you kept him waiting, you have reached the timer for this quest and will lose 3 influence points. It is still possible to receive the perfect success outcome despite reaching this timer, if you did all the optional research.

Answer his questions, and if you gained enough influence, Cyr will announce that they are joining the collective and you receive the "Perfect Success" outcome.

If you failed to convince him, there is additional dialogue at the end which may result in combat.

To finish the quest, return to Rissa in Berg and inform her of the outcome.

For all outcomes except "Failure", you receive from Rissa: