Ancestral Peacemaker is the final faction quest for The Blue Chamber Collective in Outward, and seventh in the series of main quests.

This quest has a timer of 7 days. Failing to complete the quest in this time frame will prevent you from obtaining the perfect outcome.

While you were dealing with the events of the previous quest, the war between the Heroic Kingdom and the Collective has only intensified. It has gotten to the point that Elatt himself has to interfere and order for peace between the two factions. However, some members of the collective are not happy about this outcome and do not wish to make peace with Levant. You must convince them that peace is the best option for everyone before peace negotiations take place in Elatt's temple in Monsoon.

During this quest, the city of Levant will be inaccessible due to Martial Law being in effect.

Talk to Rissa to begin the quest. She will inform you that Elatt has demanded peace, and a truce with the Heroic Kingdom has been declared. She needs us to convince some of the Chamberlords to agree to the peace - specifically, Sagard, The Montcalm Tribe and The Ash Giants.

This quest is very time-sensitive, so it is recommended to do the steps in the same order as this guide if you want to receive the best outcome. 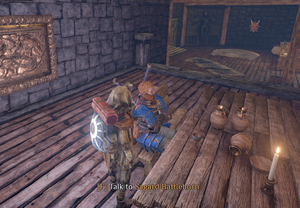 The player negotiates with Sagard in the Old Coin's Inn

Speak with Sagard in the Old Coin's Inn. 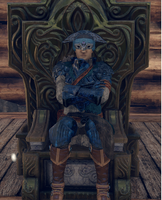 Travel to the Montcalm Clan Fort in north-western Chersonese. When you enter the camp, no enemies will be aggressive towards you, as peace has been declared. Approach Rastarte, the Montcalm Chamberlord, in his chambers at the top of the fort.

Travel to Giants' Village, in the Hallowed Marsh and speak with either Highlord Cyr or Gold Belly. As long as you have not been permanently exiled from Giants' Village, all you need to do is talk to the leader of the village and ask them to make peace. 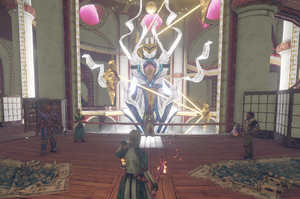 The player arrives at the Temple in Monsoon

Head to Monsoon. Once in the city, head directly forward all the way up the long steps into the Temple. Proceed forward to begin the negotiations dialogue with several major characters in the story.

Defeat all Scourge beasts around the city, aided by ally NPCs. There is a powerful Immaculate called the Butcher of Men, who drops a unique item.

Speak to Rissa in Monsoon to complete the quest. Rissa will thank you for your help defending Monsoon, and will give you various rewards depending on your success during the quest.

From the negotiations, depending on your progress in the entire Blue Chamber questline: