A Knife in the Back

A Knife in the Back is a Quest in Outward. It is fifth in the series of main quests, and is the second quest of the Sorobor Academy quest-line. 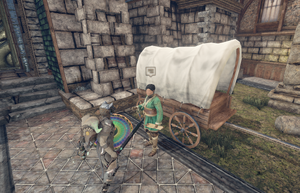 The player speaks to the Soroborean Caravanner about travel.

To begin the quest, speak to Victor Berthelot, Dean of the Military in the military district. He asks us to run another errand for him, this time to the city of Levant in the Abrassar desert. Artois lets slip that this is also related to the distilled Immaculate's blood we helped collect earlier. 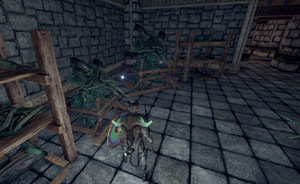 The Inactive Forge Golems with the Replacement Valves.

To get to Levant, you can speak to the Soroborean Caravanner and ask to travel. If you're lucky he will offer to take you there directly, otherwise you can either sleep for 3 days and try again, or travel to another city and simply walk there.

Either way, make your way to Levant and find Engineer Orsten in the south-east area of the city. Orsten will ask you to retrieve some items for him from a nearby fortress, the Electric Lab. This laboratory can be found north of Levant, and is marked as "Fort" on the map.

Once in the Lab, head around the corner and take the elevator down to the next level. Head directly forward and then turn right down a narrow corridor. Interact with the wooden doors to reveal two secret rooms, one of which contains several Forge Golems, as well as many more broken ones. Three of these broken golems can be interacted with to obtain Replacement Valves. Collect these three valves and continue down through the dungeon. 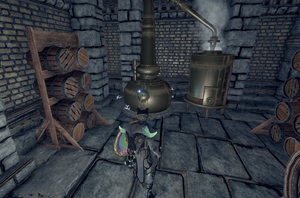 The large alchemical device with the Lightning Grease.

Head back into the large room with the elevator and head down the big ramp. Turn right, and then right ahead, and you will see a large golden machine ahead. Interact with this machine to obtain the Lightning Grease. 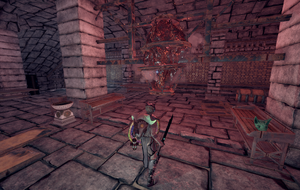 From the machine, turn around and head downstairs, as low as you can go, until you come across an elevator. Looking at the elevator, turn right and go downstairs again, through the short tunnel with ankle-high water, then upstairs to the right into a room with two Mantis Shrimp. On your right as you enter the room, there is a Power Coil on a table.

If you didn't take the Power Coil in the Mantis room, on the table, it can be found as spawns all throughout Electric Lab, found as loot from Sword Golems, or simply purchased from Orsten back in Levant.

Return to Orsten and speak to him, making sure to hand over all of the items and completing his dialogue. 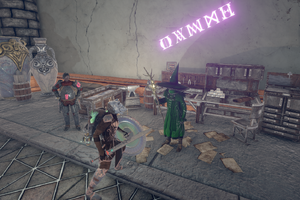 Turnbull, Desy and the player in Turnbull's secret lab.

Return to Harmattan via any Soroborean Caravanner, and speak to Victor. If you were successful with Orsten he will reward you with 50

After speaking to Victor, head to Gregory Turnbull, Dean of the Arcane at the Sorobor Library. However he is not at his usual location by the Ley Line, he is right by the entrance of the Academy, to the left of the recruiter when you walk in.

Speak to Turnbull and he asks you to join him in his secret lab, which you can access by interacting with the circle on the ground behind the statue Turnbull was standing by.

Enter the lab to find Desy here as well. Speak to Turnbull and we learn that he is planning an experiment which he hopes will cure the Immaculates of their incessant hatred for Elatt. He asks us to head to the Corrupted Cave in north-east Antique Plateau to negotiate with the Friendly Immaculates before The Wolfgang beat us there. 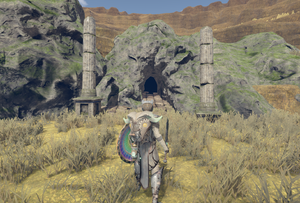 The entrance to the Corrupted Cave in north-east Antique Plateau.

This section is likely timed, but it is not currently known what this timer is. Head to the Corrupted Cave in north-eastern Antique Plateau, inside you will find many Friendly Immaculates. 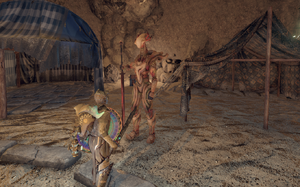 The player negotiates with the Friendly Immaculates.

Head as far into this dungeon as you can to find one Immaculate wielding a large blade who you can speak to. Talk to him and begin negotiations.

If you want to fight the Immaculates instead, you can choose these options: (note, probably leads to worse rewards) 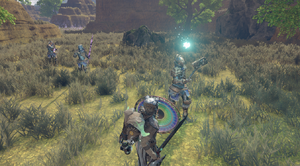 Fighting the Wolfgang Mercenaries for the Immaculates.

If you successfully allied with the Immaculates, head outside the cave and defeat the two Wolfgang Mercenaries and the Wolfgang Veteran, then return to Turnbull in Harmattan. If you are defeated it doesn't really matter, just go to Harmattan afterwards, your backpack will be inside the nearby Mercenary Camp however. 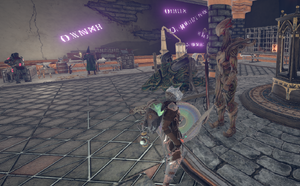 The Immaculate and the player, now back in Turnbull's lab.

Return to Turnbull in Harmattan in his secret lab and speak to him to complete the quest. You can now speak to the Immaculate in the lab as well.

From Victor on success: