A House Divided is a Quest in Outward. It is seventh in the series of main quests, and is the fourth quest of the Sorobor Academy quest-line.

Unlike the other factions, this is not a Peacemaker quest, we instead prepare for an important debate against Victor regarding the pacifying experiment on the Immaculate.

This quest has a timer of 20 days. Reaching this timer will mean you can no longer complete any of the optional objectives and must head to the debate immediately. 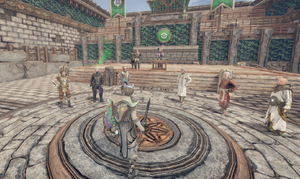 The Sorobor Academy NPCs gathered in the debate area in north-east Harmattan.

Talk to Turnbull in his secret lab. We learn that Victor has become aware of our experiment with the Immaculate, and Turnbull fears that he might be trying to frame us with more than we are guilty of. Turnbull urges us to prepare for the debate with Victor as much as possible.

Looking at your map, you may wonder where all the NPCs have suddenly gone.

Head to the very north-eastern corner of Harmattan, only one NPC shows on the map but many NPCs are present here, including the three we need to speak to.

Warning: Do NOT begin the debate yet! Be careful not to interact with the center of the circle where the NPCs are standing! 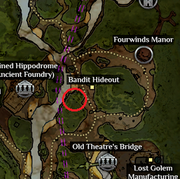 The location of Erica's stolen box, east of Harmattan.

Speak to Erica Kasper, Dean of Naturalism in the debate area. Ask for her help in the debate and she will in turn ask a favor of you: to retrieve her stolen box from a house in the East of Antique Plateau.

Head towards the Bandit Hideout in north-eastern Antique Plateau, however do not enter this building, we want to head to a different ruined building a short distance south. 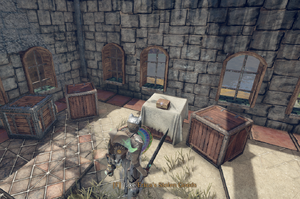 Claiming the stolen box after pulling the lever near the Bandits.

Out the front of the other ruined building, you will see a Kazite Bandit waiting guard out the front. Head inside and enter the first room on your right, and you will begin a conversation with the Fourwind Gang leader.

Combat will begin, but it is not mandatory to defeat these bandits. Simply pull the lever here next to the Bandits, then enter the adjacent room in the same ruins (which was previously locked) and claim Erica's stolen box.

You can return to Erica now, or wait until you have completed more tasks. 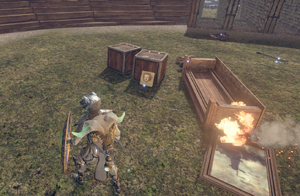 The Ancient Portrait we are looking for at the Old Theater.

Joliette asks us to retrieve an ancient portrait from the Old Theater.

The Bandits are in the same area as where Gemstone Key C is found, at the exit of the Lost Golem Facility.

Defeating the bandits is optional, all you need to do is take the Portrait off the ground, as shown in the picture above.

You can return to Joliette now if you wish, or complete the third task before we return. 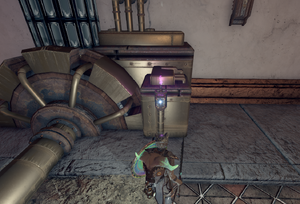 One of the machines with a Mana Filter.

For this part it is highly recommended to use the Runic Train, and to have unlocked the elevator system in this dungeon. See guide on Rust and Vengeance if needed.

Take the train from Destroyed Test Chambers to Compromised Mana Transfer Station. This guide assumes you have already activated the elevators, if not see Rust and Vengeance.

Return to Samuel with the three filters and give them to him. 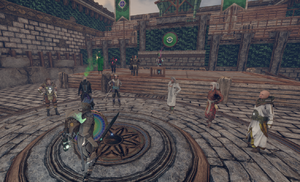 The player debates with the members of the Sorobor Academy.

Make sure you speak to all three of the NPCs (Joliette, Samuel and Erica) about the tasks to gain power in the debate!

When you are ready, stand on the center of the circle and begin the debate. Use the following answers if you are aiming for a success:

After the debate, if you are successful you will get the following: 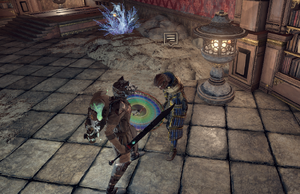 The player speaks with Artois in Old Harmattan basement.

Enter the Old Harmattan Basement in northern Antique Plateau, you may be familiar with this location if you helped Sekiguchi during a previous quest.

Inside the Basement, head towards the end and you will find Artois Sutherland here, injured. Artois will tell you that they were ambushed by the Scourge, and that the Runed Immaculate saved his life (assuming you got the outcome where the experiment was a success).

Artois urges you to head through into Old Harmattan and help save Desy and the Immaculate.

The entrance into Old Harmattan is behind Artois.

Head directly west all the way until you reach an Immaculate Warlock. Defeat this Warlock and loot the Old Harmattan South Key, open the gate behind him, and head through.

Continue through Old Harmattan, eventually you come to another dead end, there is an Immaculate Raider here who holds the Old Harmattan North Key. Defeat the Raider, take the key, and head through the eastern gate. 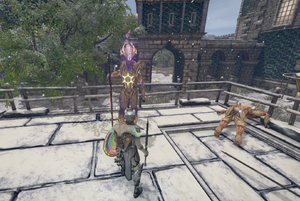 The player speaks to the Runed Immaculate after the battle.

Head east and defend the Runed Immaculate with Desy to complete the battle.

You can choose between Tsar Bow and Tsar Chakram for your reward, this probably requires a certain degree of success in the battle.

Depending on your success in the entire Sorobor Academy quest-line: